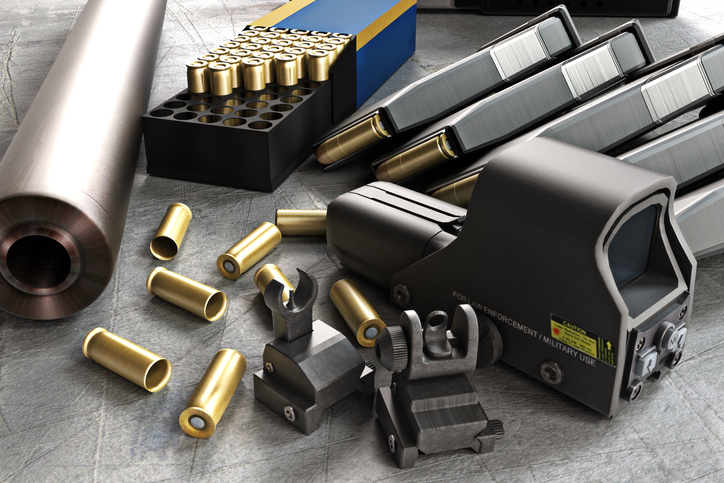 Whether you're new to the world of guns or you've been on the range for years, it's important to know all of these gun terms. Increase your knowledge even more with tactical training. Check out our training schedule and contact us for more information or to enroll in a course.

Acronym for Automatic (or Autoloading) Colt Pistol. ACP refers to the different cartridges designed by John Browning for the Colt semi-automatic pistols and includes the .25 ACP, .380 ACP, and .45 ACP.

The mechanism of a firearm introduces a new cartridge for firing and removes the spent casing. Action types include bolt-action, lever-action, and pump-action.

Mistakenly used as an abbreviation for “Assault Rifle,” but actually means “ArmaLite Rifle” and mostly refers to the AR-15 rifle.

Often referred to as a "machine gun," this type of gun will fire multiple times with a single pull of the trigger as long as the magazine has ammunition.

The barrel is the tube-shaped part of the gun where the bullet exits. The longer the barrel, the higher the exit velocity and the further the bullet can travel.

Also known as gunpowder, black powder is used to propel ammunition from a firearm. As the name suggests, it differs from smokeless powder because it produces more smoke. Smokeless powder is considered safer and more potent.

Often used for effects or training, a blank round is loaded only with black powder but no bullet, so the gun will still fire, but nothing will be discharged.

The caliber is the diameter of the inside of a gun's barrel, which determines the ammunition size for guns with rifled barrels, such as rifles, pistols, and machine guns. Bore is an older term used to refer to the interior of the barrel and is still used today for shotguns. Gauge is used to refer to the bore size of a shotgun.

Slang for empty shell casings. The term is used because most shells are made from or have some in them.

The ammunition used in shotguns. Buckshot pellets create a widespread when fired, making them ideal for hunting larger animals.

Often used in indoor shooting ranges, a bullet trap is a backstop that catches a fired bullet.

Casings contain the cartridge or round and include gunpowder, projectile, and primer. Casings are typically metal for handguns and rifles and are plastic for shotguns.

The area where the cartridge is seated before firing. Both rifles and pistols have single chambers, and revolvers have multiple chambers.

A tapered constriction at the end of a barrel to improve accuracy. Often used on shotguns, but can be used on rifles and pistols as well.

Unloading a firearm and double-checking that it is “clear,” usually to fix a malfunction.

Sometimes incorrectly used interchangeably with "magazine," a clip holds cartridges or rounds together for reloading a magazine or inserting directly into the firearm.

Manually pulling back the hammer of the gun, effectively arming it.

This indicates that it is safe to walk down on a range because all firearms are unloaded and not in use.

A shot quickly followed by a second shot after the shooter visually confirms the first shot was well-read. Also known as a double-tap, though a double-tap usually does not rely on a second sight picture.

The cross-shaped center seen in a scope that aids with aiming, also known as the reticle.

The cylinder rotates multiple chambers only in revolvers to align each cartridge with the barrel before firing.

The range area where the targets are located and firearms are fired toward.

A round of ammunition that does not fire.

A round without an explosive charge used for training.

The extractor pulls the spent case from the chamber, and the ejector releases it.

When the trigger is pulled, but no shot is fired. Often caused by a failure to feed, bad ammunition, or a broken firing pin.

At a range, the line or area that shooters stand behind to fire their guns.

Once cocked and the trigger engaged, the hammer strikes the firing pin, which impacts the primer cap, causing the weapon to discharge.

When the shooter maintains aim, breath control, hold control, and trigger control until after the shot, recoil, and the gun has settled back into position.

A buildup of carbon, lead, and wax in the gun's bore that can cause an inaccurate fire if not regularly cleaned.

The measurement used for the weight of a bullet or the amount of powder used in a single cartridge. Seven thousand grains is equal to one pound.

The handle of a handgun or side panels of the gun's handle.

A trigger with high sensitivity that can be engaged with very little pressure.

The hammer is cocked, or pulled back, against its spring, which is released when the trigger is engaged, causing it to strike the firing pin.

A bullet with a concave nose that causes the bullet to expand on impact, providing more controlled penetration.

On a range, this indicates that it is not safe to walk downrange because all firearms are loaded and may be in use at any time.

A firearm malfunction that makes the gun unusable and may need to be fixed with tools.

The backward momentum of the firearm that affects the shooter, used to describe the recoil.

The unit that feeds the cartridges into the gun. Often mistakenly used interchangeably with the term "clip."

A cartridge with a larger case size than a similar cartridge of the same bullet caliber, and is a higher velocity projectile.

When the primer in a cartridge fails to ignite, and no bullet is fired.

The end of a gun's barrel where the projectile exits from.

The backward momentum from the gun's discharge, experienced by the shooter as the "kick."

Spiral patterned grooves in a rifle's barrel that create spin, stabilizing the bullet and improving accuracy.

One unit of ammunition or a single cartridge.

A mechanism restricting the gun's trigger, preventing it from being fired until the shooter is ready and disengages the safety.

A magnifying tube attached to the top of a firearm that allows the shooter better accuracy at a greater distance.

The arc of the bullet as it exits a gun's muzzle.

Six Maritime offers tactical weapon training to help hone your skills in real-time. Contact us today to start working one-on-one with a trainer.