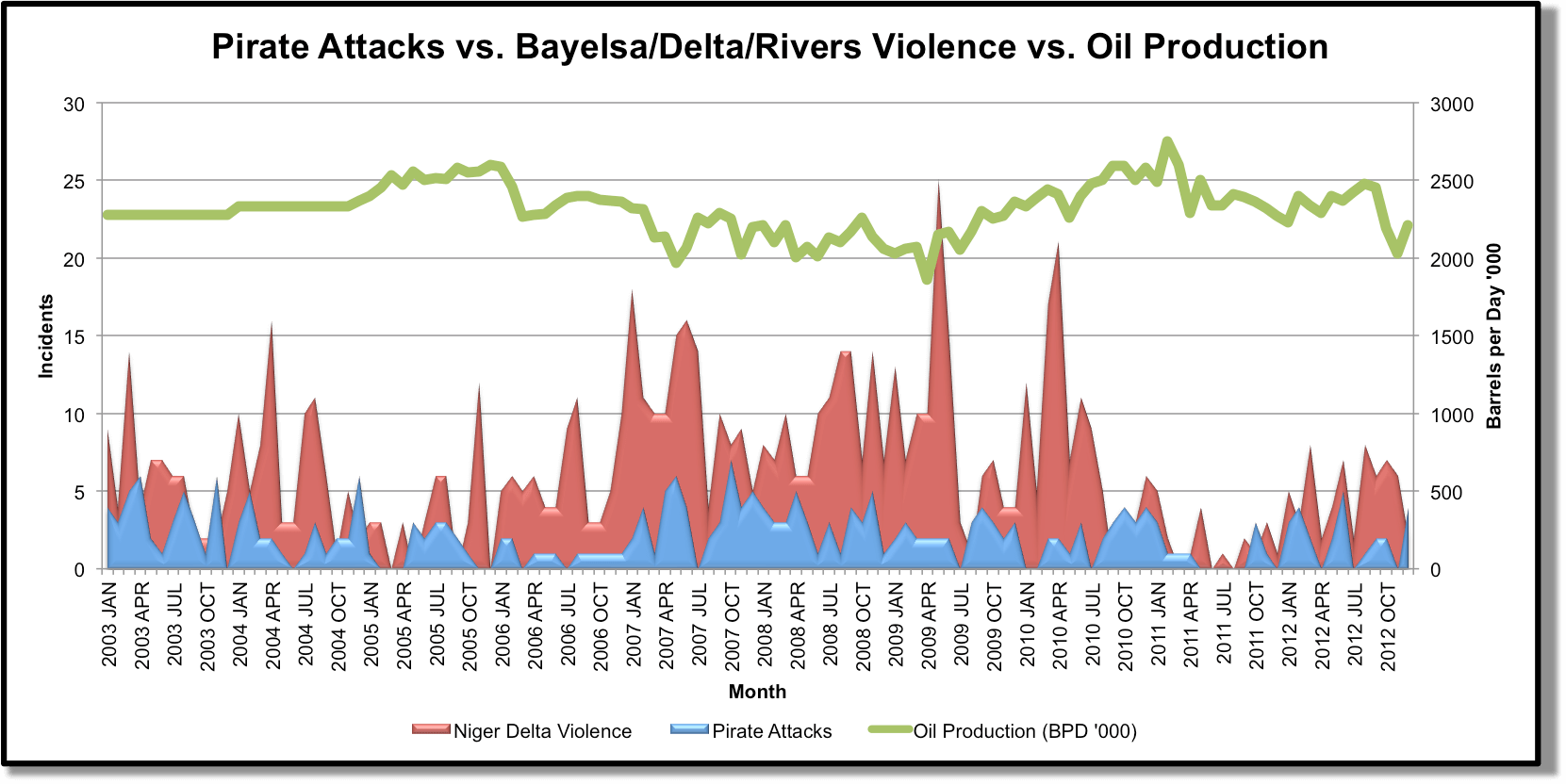 For nearly 15 years, armed Nigerians have sought to make a profit and political statement by pillaging ships and kidnapping crews in the Gulf of Guinea. The men that terrorize West Africa’s busiest shipping lanes are products of the state’s ongoing battle against militancy and criminal enterprise in the Niger Delta. The country furnishes two subversive conditions that provide fertile grounds for organizations like the Movement for the Emancipation of the Niger Delta (MEND) and other militant groups in the region: state dysfunction provides a permissive environment for nefarious groups while mismanaged natural resources fund an economy of corruption and violence.

By any objective standard, Nigeria meets the criteria of a weak state. Omnipresent corruption and the failure to provide adequate public services have eroded the legitimacy of Nigeria’s federal and state governments. Contemporaneously, security forces struggle to control and maintain a monopoly on the use of force in the oil-rich south and the Boko Haram-occupied territories of the north.

Though the indicators of state weakness are clear, worth investigating is the counter-intuitive link between the disorder and the country’s oil wealth. Despite Nigeria’s $50 billion in annual oil revenues and its status as Africa’s second-wealthiest country by GDP, 30 percent of its citizens are unemployed and 67 percent live in poverty. The country’s glaring income inequality and stagnant development suggest that natural resource wealth has had a negative impact on long-term economic growth. This phenomenon, known as the natural resource curse, is a common ailment of a developing country’s overreliance on a single, lucrative export commodity.

There are several plausible explanations as to how Nigeria fell victim to the curse:

There are various macroeconomic explanations for the strong export and weak growth paradox. But when the state fails at effective resource management it becomes more prone to civil conflict. The inequitable distribution of resource wealth undermines the legitimacy of a central authority when investment in infrastructure and civil services are absent. When the weak and delegitimized government is unable to prevent the looting of natural resources, organized crime emerges. Black markets and resource rents finance militant groups while socioeconomic grievances provide impetus for rebellion. State weakness then provides latitude for rebel groups to organize and operate with minimal interference. These very conditions have facilitated the rise of the Niger Delta’s insurgency.

Maritime piracy in the Gulf of Guinea is merely an extension of onshore dissent and lawlessness. Easy access to one of the world’s busiest energy corridors has provided Nigeria’s militants with a target-rich environment and an opportunity to expand criminal and insurgent activities offshore.

The graph above represents the ten-year relationship (2003-2012) between the number of pirate attacks; onshore violent incidents in Nigeria’s primary oil infrastructure states of Bayelsa, Delta and Rivers; and the country’s oil production in barrels per day. Visual confirmation appears to suggest that onshore violence (militia violence, clashes with security forces and vandalism) is inversely related to the ebb and flood of petroleum production. Pirate attacks appear to mirror onshore disorder and changes in maritime piracy trends suggest an inverse relationship to production rates.

Correlations between oil production, onshore militancy and pirate attacks complicate Nigeria’s maritime piracy troubles. The correlations are a testament to the depth and severity of Nigeria’s challenges; there is no silver bullet that will sink maritime piracy or put an end to the Delta’s insurgency. Piecemeal solutions like social welfare initiatives, environmental cleanups and amnesty agreements do little to improve state capacity or overall management of natural resources. Nigeria’s long-term solution to security and stability may be contingent on undoing the resource curse. Once state institutions are strengthened and Nigeria is better able to safeguard its principal commodity, macroeconomic reforms should seek to promote smarter resource management. In the interim, stability is paramount for creating conditions conducive to long-term investment and sustained growth. In the absence of immediate in-house solutions to the pirate, militant and oil trifecta, outsourcing security solutions may be the most practical and effective remedy to the Niger Delta’s security shortfalls.