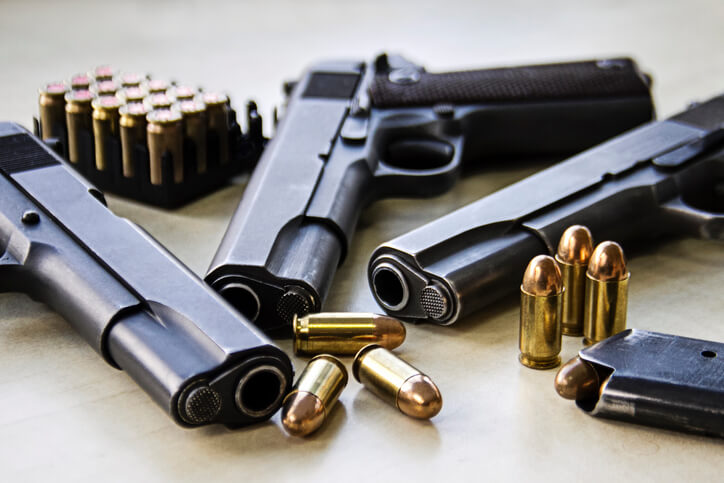 Gun ownership has a long history in the United States. For many Americans, owning a gun is a key point of pride in their life. In fact, a June 2017 Pew Research Center survey found 66 percent of gun owners own more than one gun. But with media coverage of gun violence, does owning a gun go hand-in-hand, signaling a causation, or is it a correlation?

Recent surveys of Americans would support a lack of correlation if one were to make the argument. A 2016 Gallup poll found gun ownership has fallen 11 points since a peak in 1993, from 51 percent to 39 percent. A similar 2016 CBS News/New York Times survey found only 36 percent of Americans say they own guns, compared to a peak of 53 percent in 1994.

With gun ownership tightly woven into American society historically, for many, it is part of their personal identity. Gun owners and enthusiasts connect to one another from a social standpoint, with many owners citing most of their friends also own guns.

As for ownership itself, Pew found “a vast urban-rural divide in gun ownership rates.” Forty-six percent of adults living in a rural area said they own a gun, compared to a combined 47 percent of suburban and urban adults. When asked about the major reason they own a gun, responses broke down into:

Though surveys give some insight into gun ownership in America, they don't provide hard data on a causation, correlation, or otherwise to gun violence. The Firearm Violence Research Center, which launched in July 2017, aims to use scientific investigation and understanding to find effective ways for gun violence prevention. A collaboration between the University of California at Davis and several other UC campuses, one of the first tasks will be to gauge the risk factors in gun violence.

Four in 10 adults in the United States say they live in a household with a gun, meaning your child(ren) may be around a firearm whether you’re with them or not. Age appropriate gun training can begin as simply as teaching young children hands-off. From there, parents and guardians are encouraged to educate their children through a professional gun safety course, such as the NRA’s Eddie Eagle program or a state-certified hunter safety education program.

Florida was the first state in the nation to pass a Child Access Prevention (CAP) law in 1989. This law, and similar laws in 27 other states and Washington, D.C., requires the safe storage of firearms to ensure the safety of minors in homes where firearms are kept. If a loaded firearm is stored or left on property under the owner’s control, such as a home, and the owner reasonably knows or should know a minor is likely to gain access to the firearm without lawful permission from a parent or guardian, the property owner can be charged with a felony.

What to Do When A Gun Is Unattended

Leaving the area of an unattended gun is imperative for children as they could be harmed by another person who doesn’t know not to touch the gun. It’s also important to stress the necessity of telling an adult about the gun as soon as possible. The sooner the firearm can be attended to, the sooner the risk is minimized for everyone in the situation.

What to Do If Someone Has A Gun

There are a lot of things for a child to remember when around someone with a gun. Above all, teaching them to stay calm should be at the forefront of everything else.

A gun safety course and gun training courses are strongly recommended for anyone who wishes to buy and own a firearm. In Florida, it’s generally prohibited for anyone under 18 years old to possess a firearm, unless they are:

Gun owners and enthusiasts learning and following proper gun safety guidelines have brought the number of accidental deaths by firearms in the United States down to only one-half of a percent of all accidental deaths. Even if you’re an experienced gun owner who regularly spends time at a shooting range, taking a safety or tactical firearms training course again from time to time may be a refresher in fundamentals.

A firearm safety course, such as a handgun course, educates those who are 18 years old or older and are new to firearms in Florida. Areas covered include safe and proper care of the firearm, storage, and use. The courses provide students basic knowledge and attitude needed for safely owning and operating a firearm.

Floridians love the outdoors, whether they’re participating in a recreational activity or taking part in one of the sanctioned hunting seasons. The state requires anyone born on or after June 1, 1975 to pass a hunter safety course from Florida Fish and Wildlife Conservation (FWC) before purchasing a hunting license. Exemptions to this include using the Hunter Safety Mentoring Exemption and/or hunting under the supervision of a qualified hunter. FWC offers four options for people to complete the hunter safety requirement, including a traditional face-to-face course and two partial to completely online options.

Guns in America aren’t going away. We keep them for protecting ourselves, families, and homes. Hunting and sport shooting are deeply engrained in our lives. And though there has been a decline in gun ownership, the number of background checks and gun purchases has increased in recent years. Does this mean those who own guns are perpetrating gun violence?

Statistically speaking, there are a myriad of risk factors precluding gun violence beyond whether a person own a gun or is a gun enthusiast. Years of education through safety programs and gun training classes have led to a decline in firearm accidents nationwide. The recent Pew Research survey found gun owners and non-owners alike, 86 percent of adults, said the ease of which people can illegally obtain guns is the largest factor in gun violence.

At Six Maritime, we encourage gun owners and enthusiasts to receiving continual safety training. A review of the basics can make you a better marksman and keep those safety tips at the forefront of your mind while shooting. It’s easy to get caught up in a media frenzy when a tragedy caused by gun violence occurs, but as a gun owner, it’s important for you to continue to follow the safety laws and guidelines in order to perpetuate the truth: gun ownership does not lead to gun violence.