Don't Let Your Guard Down During Firearms Training

Don't Let Your Guard Down During Firearms Training 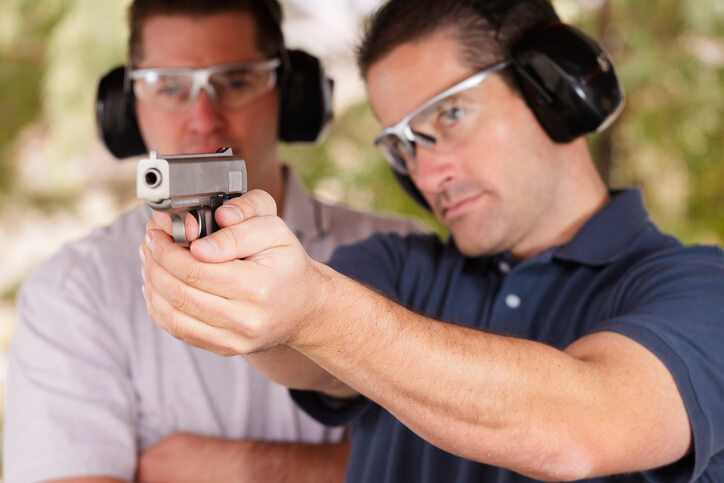 When you’re shooting on a gun range or during a training course, there are clear safety rules to follow. But what about when you’re not actively firing? Just because you’re waiting for your turn to shoot, or observing the technique of another shooter, it doesn’t mean you can let your guard down or mind wander. Staying vigilant and focused is your top priority as a shooter. Whether you’re active on the firing line or watching from the sidelines, follow these safety rules from Six Maritime to protect yourself and everyone else at all times.

Point The Muzzle In A Safe Direction

If gun owners always pointed their muzzles away from themselves and other people, virtually no firearm accidents would occur. Whether you're armed with a rifle or pistol, never aim your weapon at anything you don’t intend to shoot — this applies to dry firing, as well. While you’re waiting for your turn on the range or in a tactical training course, point your muzzle at the ground away from anyone’s legs and feet. And don’t let yourself get distracted by what’s happening around you, because that’s when accidents happen. In your free time, practice holding your weapon correctly. This way, you can commit safe behavior to muscle memory and do it without a second thought.

Keep Your Finger Off The Trigger

Your weapon’s trigger is not a finger-rest. If you’re outside the firing line, your finger has no reason to be near the trigger. Trigger safety requires vigilance and self-awareness, because when you’re holding a gun, your hand may instinctively inch toward the trigger guard. So maintain your mental guard and place your hands in a safe position.

While guns and ammo are virtually harmless by themselves, together they are a lethal combination. To reduce the risk factors when handling a weapon, don’t insert ammo or a magazine until you’re facing the target and ready to fire. If you’re standing around, make sure your gun is unloaded, and never rely on the “safety” alone. On the firing line, you should activate the safety in between taking shots, but remember that a loaded gun with the safety on can still misfire.

If you’re around guns while they’re being fired, whether at the range, on a hunting trip, or in a tactical weapons course, protect your eyes and ears with earplugs and eyewear. Ideally, your safety equipment should be designed for gun owners. Earplugs have a noise reduction rating (NRR) that corresponds to the number of decibels blocked, for instance. Gun noises louder than 85 decibels can cause hearing damage to unprotected ears, so choose earplugs with higher NRRs. (Just make sure you can still hear verbal directives from weapons trainers, safety officers, and other shooters.) Your eyewear should be selectively chosen, as well. Protective glasses or goggles should not only keep your eyes protected from smoke, shrapnel, and debris but also enhance — rather than restrict — your vision.

In a controlled environment, such as a tactical training course or gun range, it’s imperative to obey all commands from trainers or range safety officers (RSOs). RSOs supervise shooters and enforce range safety rules. If a problem happens, such as a target needs replacing, the RSO will call a ceasefire and walk downrange. Ceasefires also happen in firearms training, such as when an instructor is giving lessons or setting up a target area for shooting drills. During a ceasefire, all shooting should stop. Your weapon should be unloaded with the magazine removed, and you should step away from the firing line while keeping your muzzle pointed down and your finger off the trigger.

These gun safety rules from Six Maritime are more than proper etiquette for gun ranges and training courses, but they’re also life-saving measures that all firearm owners, from novice target shooters to avid hunters, should know. If you’re interested in improving your firearms skills, including safety, handling, and accuracy, feel free to sign up for a tactical training course.